What “Drives” the use of ICT in education?

A previous posting, “Technologies for teaching and learning”, discussed the envisaged benefits that accompanied the introduction of film, radio and TV technologies into education. A summary might be “lots of hype, but little substance”. Bearing such observations in mind may give a higher perspective when trying to identify similar drivers for ICT.

Back in the 1970’s, schools and universities were investing heavily in ICT equipment and software. These technologies were generally seen as innovative and engaging (ref). However, I have had difficulties trying to find explicit drivers for the introduction or even funding of these technologies. Cuban (2001, pp13) suggests a possible driver for the mass investment in ICT of the 1990’s:

“… the economic prosperity of the 1990’s, unrivalled in the 20th century, has now convinced most doubters that information technologies have accelerated American workers productivity. As a consequence, introducing electronic tools into schools has become a priority of corporate leaders and public officials.”

Around the same time in Europe, officials were coming to realise the affordances of the networked computer – and the perceived dangers of not investing in these technologies, as the Bangerman report of 1994 highlights:

“… our suppliers of technologies and services will lack the commercial muscle to win a share of the enormous global opportunities which lie ahead. Our companies will migrate to more attractive locations to do business. Our export markets will evaporate.”

Bangermann emphasises the growing nature of the “Knowledge Economies” and fuelled fears that a lack of investment in an ICT infrastructure will compromise Europe’s ability to do business, identifying that “… Education, training and promotion will necessarily play a central role.” (Bangemann, 1994, p4) This mindset was a major driver for massive investment in Information and Communication Technologies from the mid 1990’s.

“The role of ICTs in these movements is so embedded in that it is mentioned as a fait accompli."

I have found that whichever politician is talking about ICT in education, whether it be Michael Heseltine in 1995, Tony Blair in 1997 or David Blunkett in 2001, specifics about how they expect ICT to enhance education are absent (all quoted in Watson 2001). Perhaps one reason there is a lack of espoused drivers from our politicians is that ICT is a field which moves so fast that specifics can become obsolete embarrassingly quickly.

And the politicians are not alone. Academics such as Salmon (1999) identify various initiatives in the Open University using ICT in education, but do not offer any drivers or rationale for using the technology.

Reverting to (or falling back on) governmental papers and NGO reports, I have found one example that suggests some drivers – the UK’s Futurelab report: “Literature Review in Science Education and the Role of ICT: Promise, Problems and Future Directions” (Osborne and Hennessy, 2003). Here are some drivers I extracted from the text *(p4):

Returning to academia, I found a more complete list of affordances, and therefore possible drivers in a paper by Conole and Dyke (2004) that attempts to create a taxonomy for the affordances of ICT in education. I suggest these are more comprehensive that something we might get from government rhetoric or reports. The first six are easy to find positive, “Politician” style “Amplifications” (Kanuka & Rourke, 2008) for. Here I have paraphrased the mentioned authors:

The final four tend towards the reduction rather than amplification model:

A summary of the drivers of ICT in education

Finally, I paraphrase Abrami et al’s (2006, pp1) list of drivers, benefits or affordances – perhaps going some way towards a taxonomy of the drivers for ICT in education:

Abrami et al (2006) “A Review of E--learning in Canada: A Rough Sketch of the Evidence, Gaps and Promising Directions”; http://www.ccl-cca.ca/pdfs/StateOfField/SFRElearningConcordiaApr06.pdf Last accessed – 7-12-09.

Technologies for teaching and learning

As part of my dissertation research I looked at technologies for teaching and learning with a different perspective – looking through a critical lens, identifying common assumptions and excluding them from the picture hoping what was left got me further towards the truth.

I suggest the next milestone in teaching and learning technologies is writing – the recording of words, and therefore stories and histories. The writing of numbers occurred around the same time, driven by economies which had outgrown the recording of business transactions by memory alone (Beddoe 1983). An early critique of a technology purported for education may have been Socrates who is reputed to have been of the opinion that knowledge should be discussed and fluid – noting that no matter how many times you read a book it tells you the same story every time (Phaedrus, Plato).

Moving to the last millennium, we find today’s academics describing attributes of a technology that has and continues to have a major impact on teaching and learning:

This is not an academic bemoaning the rise of Wikipedia or demonising web 2.0 technologies. The words are Michael Wesch (2008), who is paraphrasing Raine (2006), who explains:

“ … I’m citing the work of … Elizabeth Eisenstein in her study of the impact of the printing press in 15th and 16th Century .”

During the first fifty years following the invention and mass adoption of movable type, the majority of the books duplicated were of the genre previously generated by religious scribes (Eisenstein, 1979). It was not until 1440 that the affordances of the printing press designed by Guttenberg were beginning to be more widely realised, moving away from replicating (enabling) traditional books, broadening out into areas like the mass production of novels, “Stories”, which drew the scorn of the intellectual classes (Beddoe, 1983; Eisenstein, 1979). Perhaps this was driven by economics – the printing press having replaced (enabling) and exhausted all the traditional markets. Thus the technology was looking for work (disrupting), a little like the laser of the 1950s (ref). It has been suggested (ref) that at that time society was wrestling literacy from the Church, and that this struggle was fuelling the demand for books.

This “New Media” also posed challenges for the authorities, mainly the Church, as it encourage the adoption of regional languages for written work rather than the pan-European Latin (ref). Some commentators further note that this move to “vernacular” and therefore national languages may have the unintended consequence of encouraging nationalism (Spender 1980). Was the printing press viewed as a mechanism to “Educate” the population? Note that the target of education was exclusively male; designed by men and for men (Spender 1980); education ignored the needs and wishes of women (Kramarae and Spender, 1993).

“Books will soon be obsolete in schools…our school system will be completely changed in the next 10 years.”

"All this will bring about a profound change in education. We will stop training individuals to be "teachers" ... (the problems teachers address) are going out of the historical window, forever, in the next decade.”

(sorry – to be completed shortly) …

Posted by David Callaghan at 15:54 No comments:

"Capella (university) implements a team based centralised course development process"
(Slide 3, Capella, 2009)
A university recognized for its exemplary e-learning development is Capella University. They are one of eight American institutions to be awarded the 2009 Blackboard Catalyst Award for Exemplary Courses (a BlackBoard sponsored award). Looking at the “Course Tour” presentation on the BlackBoard web site describes their team based approach to course development. I was especially interested in their team based approach, and found a slide illustrating the design team: 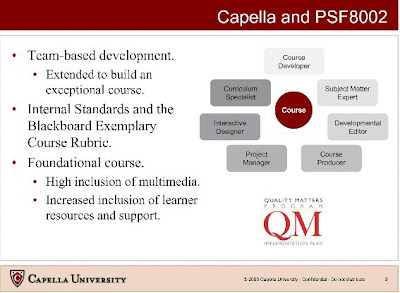 slide 3, Capella, 2009
In case it's too small for you to read, here is a list of the team members:
... and note that this is a "Basic" design team. I wonder what a "Full" design team looks like? I wonder how a typical university in the UK can compete against such a setup?

Maybe it's about time my ideas about rapid e-learning development (rELD, rTEL) got aired ... perhaps tomorrow ...
Posted by David Callaghan at 14:43 No comments:

... notions around free assessment tools.
Posted by David Callaghan at 23:21 No comments:

In favour of research

I've just submitted an early draft of my dissertation so have a few days "grace" before I get back on the rollercoaster.

However, that leaves my creative juices a little lost for a repository, so I thought I'd do a mini piece of the benefits of research to my practice.

I've been looking at the academics experience of using multi-media in their teaching. Late in the day I had to widen this to include VLE's - simply because definitions of multi-media generally started with "Text".

Following much work on a literature review of the current situation, hours of interviews and weeks of analysing and reflecting on that data, I produced a list of recommendations. Here’s a few:
- my dept to do some marketing around the role of the learning technologists - confusion and therefore tensions exist;
- rewards for staff for using TEL - currently there are none, or even a deficit model
- to encourage a lack of tolerance to equipment failure
- to encourage academic staff to share best practice - perhaps facilitating mechanisms for this
- Ensure all staff that need to teach “On-Line” have attended a basic course about how to teach on-line, that may cover everything from expectations through to feedback and marking online, and visiting contentions issues such as IPR along the way.
- Ethics - do some
- Alignment - yes please
- Replace activities with tech stuff, don't use TEL to add more work
- Go organic - look for home grown initiatives rather than top down dictates - the latter never work (lots of refs on this one);
- JIT training - team based
- Accept that stuff is becoming more fluid (evidenced by lack of printed manuals in the ICT field)

I believe my practice and my role are enhanced by this research.


Posted by David Callaghan at 23:14 No comments: